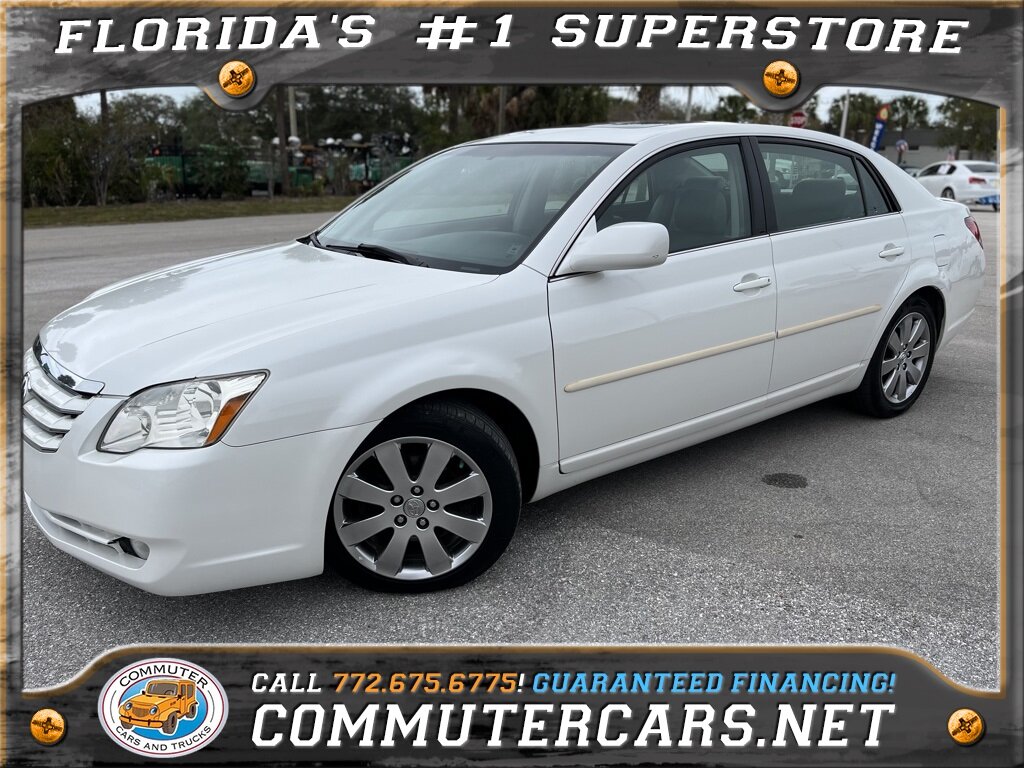 **Florida's #1 Superstore**, 5-Speed Automatic with Overdrive. 2007 Toyota Avalon XLS At Florida's #1 Super Store, "We Want Your Business" and we'll do what it takes to make it happen. Call us today for amazing customer service. (772)777-8265. At Commuter Cars we're stacking em deep and selling em cheap! FLORIDA'S #1 USED CAR DEALER, COMMUTER CARS, IS PLEASED TO BE YOUR #1 CHOICE FOR SELECTION, SERVICE AND CUSTOMER SATISFACTION. CALL (772)777-8265 AND SEE FOR YOURSELF WHY COMMUTER CARS IS THE #1 USED CAR DEALER IN FLORIDA! Vehicles like this don't last long at Florida's #1 Pre-Owned Dealer. CALL NOW! Our internet department is standing by to answer any questions you may have about this vehicle, or others we have in stock. Call us now! (772)777-8265 anytime! "To be the best, you simply have to beat the best" 22/31 City/Highway MPG

Model Overview
The 2007 Toyota Avalon may be the most American vehicle in Toyota's lineup.
This flagship Toyota sedan was engineered in Ann Arbor, Michigan, had more owner clinics to shape the vehicle than any previous Toyota, and is being built in Kentucky. While the 1995 Avalon was essentially a stretched Camry, and the 2000 version still leaned heavily on Camry hardware, the Avalon received a brand new engine and chassis in 2005.

The 3.5L V6 makes an energetic 268-horsepower and has a hefty rating of 248 lb-ft of torque. Dual variable valve timing alters the camshaft timing of both the intake and exhaust camshafts. The five-speed automatic transmission has some of the smoothest shifts we've ever felt, and helps the 3,500-pound car achieve an EPA fuel economy rating of 22 mpg in the city and 31 mpg on the highway.

We had occasion to drive a number of different Avalon models on city, highway and mountain roads, and came away very impressed. At one point, there were three six-feet-plus tall occupants, and we were amazed at how much rear legroom the Avalon provides. Further, one colleague said that the new Avalon is less Buick and more BMW.

Well, he must have been driving the $29,125 Touring model, as this is the one with the firmest suspension. Prices start at $26,875 for the XL, $31,325 for the XLS and culminate with the $34,065 Limited. The equipment level is impressive on the base model and includes such niceties as a reclining rear seat back, computer controlled engine mounts to dampen any possible motor vibration, and a nearly flat floor.

Aside from the tuned suspension, the Touring adds larger wheels, a rear spoiler, HID auto-leveling headlights, fog lights, and leather seats and trim. The XLS gets a moonroof, heated power mirrors, an alarm system, HomeLink and a six-disc CD changer, among other items. The Limited drapes the interior in more wood, adds a rear power sun shade, and upgrades the audio system.

The level of refinement in the newest Avalon is so high that it's going to be hard for the next Lexus to top the Avalon. For instance, not only is dual climate control standard, but the basic models get seven fan speeds to help keep the interior hushed, and the Limited has a step-less fan. The Limited also comes with a smart key that allows you to start the car with the key in your pocket by just pushing a button on the dash. You can even get a remote engine start as an option.

Vehicle stability control, a voice-activated DVD navigation system, and dynamic laser cruise control are some of the available equipment.